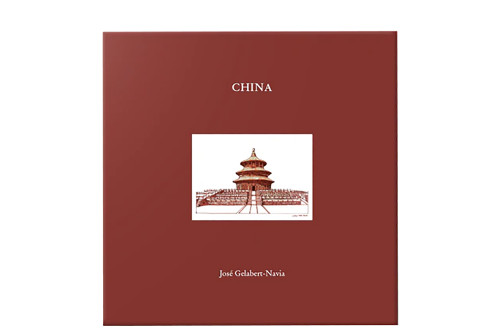 Between 1915 and 1917 the Russian composer, Sergei Prokofiev wrote a series of twenty piano pieces. While playing them for a gathering of friends, the poet Konstantin Balmont wrote a sonnet which entitled Mimolyotnosti which Kira Nikolayevna would translate as Visions fugitives. Inspired by these dazzling miniatures, I have assembled a jewel box containing twenty individual felt-tip drawings on watercolor paper capturing fugitive visions of China.

For a country that has of late been focused on the future, I have been fascinated by the search for a true contemporary regional language in traditional Chinese architecture and painting. The intricate and careful composition in relation to landscape and light has been a continual revelation, as evidenced by the Summer Palace on the outskirts of Beijing and vanishing water towns such as Zhujiajiao, known as the “Venice of Shanghai.”

In my drawings I have tried to understand the enduring value of this tradition and to learn the lessons that might allow us to create for our time while never forgetting the past.