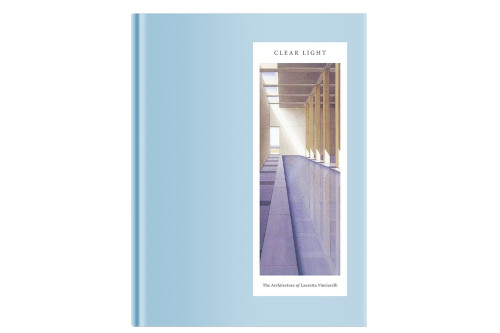 “Although much of my work is architectural in character, I do not represent real spaces. Rather, my work has its origins in the spaces I have abandoned – the mood of Rome and the landscape of Texas – and the paintings are of spaces I know that look nothing like what I paint …They are essentially meditations on essences of architecture like enclosure, surface and light. ”Born in Italy in 1943, Lauretta Vinciarelli passed away in New York in 2011.

Trained as an architect in Rome but a watercolorist by vocation, her works reside in numerous private collections and among the holdings of prominent institutions, including the Museum of Modern Art in New York, the National Gallery in Washington DC, and the San Francisco Museum of Modern Art. Noted for their luminous qualities of color and light, her depictions of imagined spaces open up a world of enclosed rooms, sweeping landscapes, watery materiality, and atmospheric ephemerality. Describing her work, a noted theorist and critic once said, “They are not architecture exactly, but evidence that it exists.”

This book brings together paintings from 1981 onwards in the most complete collection of Vinciarelli’s work to date. It also includes texts from knowledgeable commentators and for the first time presents sketch materials that provide insight into Vinciarelli’s working methodology.  Vinciarelli’s technique often operated at the very limits of her medium; sometimes even to the point of failure. In these paintings, color is used as a device for shaping space, with watercolor the chosen medium for its rich portrayal of light and the conceptual simplicity of the act of mixing paste with water.