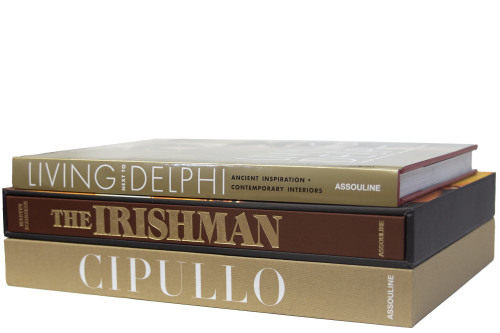 Living Next To Delphi: Lauded by Homer and Pindar, Pliny and Plutarch, the ancient Greek site of Delphi was revered for centuries as the “navel of the earth.” Seekers came from all over Greece to consult the mysterious Oracle and Sibyl, and great athletes and musicians participated in its Pythian Games. Dedicated to Apollo, the god of music, poetry, sun, medicine, light, and knowledge, Delphi is today a major archeological site with spectacular architectural remains of great historical and cultural significance. With this as inspiration, well-known Greek architect and designer Veta Stefanidou Tsoukala has designed several luxury homes in the region that are renowned for their play of architectural scale and subtle melding of influences from ancient and rustic to sleek and modern. In this beautifully illustrated volume, Veta Stefanidou Tsoukala shares the inspirations behind her richly textured creations.

The Irishman: Martin Scorsese has long been revered as one of our greatest living directors; his career spans more than 50 years and includes some of the most celebrated American gangster films—from Mean Streets to Casino and, of course, Goodfellas. His latest foray into the genre is The Irishman, a majestic epic that covers bold, new ground. Starring Robert De Niro, Al Pacino and Joe Pesci, the film examines organized crime in post-war America through the eyes of World War II veteran Frank Sheeran, a hustler and hitman who worked alongside some of the most notorious figures of the 20th century. Spanning decades, the film chronicles one of the greatest unsolved mysteries in American history, the disappearance of legendary union boss Jimmy Hoffa, and offers a monumental journey through the hidden corridors of organized crime: its inner workings, rivalries and connections to mainstream politics.

Featuring special on-set photography and studio portraits by Brigitte Lacombe, unit photography by Niko Tavernise and a text by author and film critic Tom Shone, this stunning monograph takes readers behind the scenes and examines the making of The Irishman in the context of Scorsese’s expansive career. Through interviews with Scorsese, De Niro, Pacino, Pesci, and the rest of the film’s cast and creative team, Shone situates The Irishman as a reminiscence of Scorsese’s own life and times—an intimate and cutting meditation on loyalty, betrayal, and regret.

Cipullo: Born in Naples in 1935 to a family of jewelers, Aldo Cipullo became the most glamorous jewelry designer of the 1970s and early ’80s. Aldo left Italy for the exciting possibilities of life in New York City, enrolling at the School of Visual Arts. By 1960 he was working for the acclaimed society jeweler David Webb, who was renowned for producing designs that were bold and expressive, to then joining Tiffany & Co., where he began developing his own design vocabulary.
In 1969 he moved to Cartier alongside the company’s President Michael Thomas, where, at the top of his craft, he introduced some of the most modern and timeless creations, such as the Love bracelet, a seminal design that is fastened to the wearer’s wrist with a special screwdriver. He followed this up in 1971 with the Nail collection, inspired by a nail wrapped around the finger or wrist, a surprising creation that embodied the gritty glamour of New York of the time.
Aldo Cipullo struck out on his own in 1974, continuing to create jewelry for men and women that turned heads, including pieces in the shape of the dollar sign, which he deemed “the electric eye that reflects the mood of this country.” In 1978, the American Gem Society commissioned him to create a collection featuring stones mined in America, such as turquoise from Arizona, diamonds from Arkansas and sapphires from Montana; these pieces are now part of the Smithsonian Institution. Although he sadly passed away suddenly in 1984, Aldo Cipullo’s legacy of forward-thinking yet classic designs remain perennially popular.
This slipcase volume is filled with striking images of Aldo Cipullo’s modern jewelry designs, which are both iconic and universal, intimate yet also intensely personal, contemporary and timeless. Punctuated with Cipullo family photos and fond anecdotes from Aldo’s friends, Cipullo: Making Jewelry Modern unfolds the story of one of the most innovative and, until now, enigmatic talents of modern jewelry history.