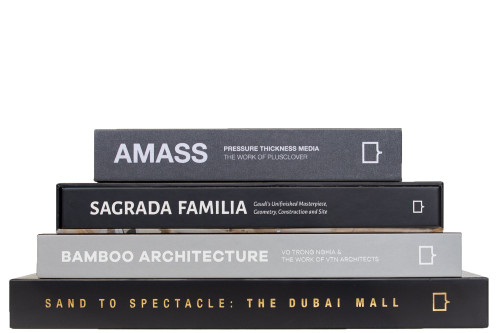 Oscar Riera Ojeda luxury coffee table stacks add a chic personalized touch to any room. Amass makes a case for architectural experiments with massing. By understanding architecture as a collection of interrelationships between multiple masses, the work of plusClover uses pressure, thickness and media – the core subjects of this book – to facilitate differing degrees of coherence. By tabulating selected projects under these three categories of massing, this book demonstrates new possibilities in massing that move beyond the singular object towards multiplicity of effects. Amass unfolds the process – from bounding box diagrams to construction photos - through which the projects were conceived, explored and detailed. Sagrada Familia focuses on that dynamic and ongoing process, and on the successive builders’ incorporation of new technologies into the structure´s magnificent design, a living work of performance in itself. It documents the cathedral’s evolution using handmade drawings, plaster models, digital imaging, and 3D modeling. It examines the geometries and formal languages that have informed generations of architects and builders. At the same time, it shows the integration of traditional craftsmanship with the most cutting edge computer graphics and robotic engineering. Originally situated on the outskirts of the city, La Sagrada Familia today serves as the enduring symbol of Barcelona. But unlike the Eiffel Tower or Brooklyn Bridge, Barcelona’s icon is still a work in progress and a magnetic center of spiritual life. In Bamboo Architecture we see how award winning projects such as the Wind and Water Café, Diamond Island Community Center, and the majestic Vedana Restaurant, alongside an illuminating introduction by Masaaki Iwamoto and an interview with the studio principal Vo Trong Nghia who offers an inspiring vision for the future of natural, green architecture. The Dubai Mall, completed in 2008, is currently the world’s largest mall and one of the largest structures in the world. Sand to Spectacle - The Dubai Mall – DP Architects documents the design process of Singapore-based DP Architects as it realized a building the size of a city in just over four years from sketch to construction. The authors perform an in-depth analysis of the historical, architectural, cultural, and physical forces at play in the building’s design, and supplement the text with a unique comparative study of Dubai and Singapore to describe The Dubai Mall as a product of both local and global influences.