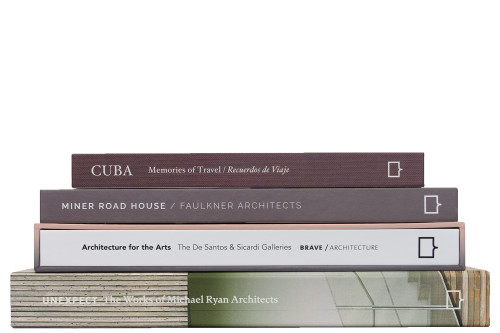 Cuba was inspired by earlier work such as : La isla de Cuba pintoresca, La Isla de Cuba and Picturesque Trip through the Island of Cuba. The drawings are souvenirs of travel, fugitive visions of a world that survives the ravages of time and history. It is not a book that documents politics or crumbling structures, as many recent publications of Havana have done. It is rather a simple sketchbook that celebrates a city that was built by immigrants who saw their talent flourish in this faraway land. Their legacy was a real and imagined city that survives today.

Miner Road House is award-winning home is located on an eight acre, ex-urban property at the base of the Oakland Hills near San Francisco Bay. Formed of concrete and wrapped with Corten steel panels, the net zero energy res-idence is an elegant, low maintenance re-sponse to its context which is draped in rich green foliage and majestic native oak trees.

Architecture for the Arts – De Santos & Sicardi Galleries is a unique book that details the thinking and design process behind two, multiple award-winning and frequently published, commercial art galleries. This book explores the numerous counterpoints between the two projects, their relevance as part of Houston’s distinctive architectural landscape, and the architect’s commitment to creating space to view and celebrate art.

Unexpect is a monograph of the work of Michael Ryan Architects, a practice based in Philadelphia, Pennsylvania. Written by Michael Ryan, it is far from being a conventional architectural monograph. Through storytelling, he takes a fresh and perceptive look at the work of the rm. Projects are documented with detailed photographic explorations and descriptions that embody Michael Ryan’s architectural vision, talent, and principles.