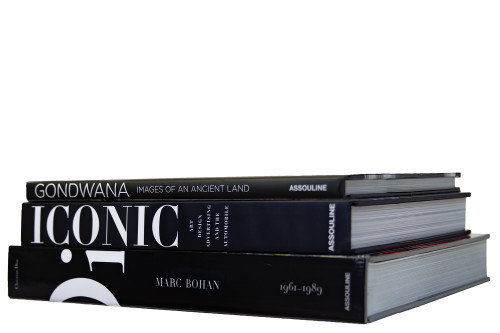 Assouline luxury coffee table stacks add a chic personalized touch to any room. A trio of luxurious coffee table books with unified bold black and white spines. Featuring a artistic close up of landscapes, architecture and design, and Dior couture. Gondwana- After receiving a grant from the National Science Foundation in 2012, art photographer Diane Tuft traveled to Antarctica to study and document the effects of ultraviolet and infrared radiation on the landscape.

Gondwana: Images of an Ancient Land chronicles the extraordinary results of that expedition, with over 50 stunning images that capture Antarctica’s raw, untouched splendor with colors, textures, and compositions that verge on the surreal. Named for the megacontinent that once contained what is now Antarctica, Gondwana presents a living re ection of hundreds of millions of years of Earth’s history, a mythical land as it has never been imagined before. The book includes a foreword by Elisabeth Sussman, Curator and Sondra Gilman Curator of Photography at the Whitney Museum of American Art.

A Ford GT with a custom Gulf Oil paint job, an Aston Martin DB5, Jacques Villeneuve’s Reynard Formula Ford, Jaguar E-Types, Mercedes-Benz 300 SL’s, and a 2015 Porsche 918m. These are only a few of the fabulous cars featured in Miles S. Nadal’s awe-inspiring Dare to Dream Automotive Museum. With this remarkable group - still only a part of his overall collection - Miles has acquired some of the most celebrated automobiles of the past century. They are carefully curated for their significance, relevance, and, most of all, for their iconic essence. Each vehicle is accompanied by an authoritative history prepared by award-winning author Ken Gross matching with photographs by acclaimed photographer Michael Furman. Every car is brought to life to the point where readers feel as they are walking through the museum.

Iconic: Art, Design, Advertising, and the Automobilenot only features Miles’ collection, but also explores what it truly means to be an icon. Interviews with renowned automotive celebrities such as Bruce Meyer, Jay Leno, Mark Trostle, and Chris Bangle, explore what makes a car “iconic”- yesterday, today, and tomorrow. With an essay on iconic advertising by marketing genius Chuck Porter, this book investigates the relationship between the car and the advertising world, and examines how that world shapes public perception of the automobile as an object of desire. From supercars to Ferraris, from Ford to Porsche, and the latest electric cars, this book covers every marque, era, and event significant to the automotive world.

Dior: During his time as a student at London’s Central Saint Martins, Gibraltar-born British fashion designer John Galliano worked as a dresser at the National Theatre, learning the art of costume and the power of illusion. As a regular in London nightclubs, Galliano met a coterie of artists and colorful personalities, forging strong ties with kindred spirits who would play a decisive role in his career – among which Stephen Jones, who would become Dior’s milliner. John Galliano has truly reinvented the art – and the very role – of haute couture, redefining its tropes into a new type of contemporary fashion that combines the influences of his travels – whether real or born of his imagination – and the bountiful heritage of Christian Dior. This book highlights the exceptional silhouettes he created for Dior collection after collection from 1996 to 2011, through his most emblematic models, as photographed by Laziz Hamani, alongside shots by Steven Meisel, Annie Leibovitz, Irving Penn and Paolo Roversi. This singular odyssey is the fifth volume in a new series of books paying tribute to the House’s Artistic Directors.