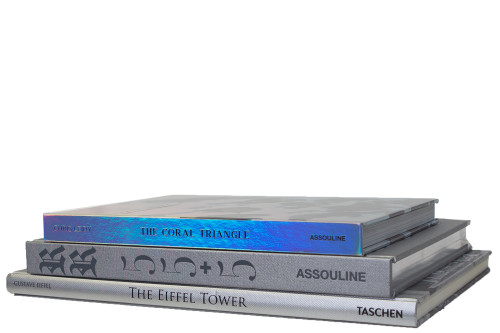 The Eiffel Tower-(Tashen) When Gustave Eiffel completed his wrought iron tower on Paris’s Champ de Mars for the World’s Fair in 1889, he laid claim to the tallest structure in the world. Though the Chrysler Building would, 41 years later, scrape an even higher sky, the Eiffel Tower lost none of its lofty wonder: originally granted just a 20-year permit, the Tower became a permanent and mesmerizing fixture on the Parisian skyline. Commanding by day, twinkling by night, it has mesmerized Francophiles and lovers, writers, artists, and dreamers from all over the world, welcoming around seven million visitors every single year. Based on an original, limited edition folio by Gustave Eiffel himself, this fresh TASCHEN edition explores the concept and construction of this remarkable building. Step by step, one latticework layer after another, Eiffel’s iconic design evolves over double-page plates, meticulous drawings, and on-site photographs, including new images and even more historical context. The result is at once a gem of vintage architecture and a unique insight into the idea behind an icon. Radical Renaissance- “Denim was freedom, denim was the biggest dream,” says Renzo Rosso of the early days of Diesel, the premium casual brand he launched in 1978 revolutionizing the denim market. Today, Rosso stands at the helm of OTB, the alternative luxury fashion group that encompasses iconic fashion brands Diesel, Maison Margiela, Marni, Viktor&Rolf. These companies are connected by the same streak of rebellion that has marked Rosso’s own career—a sense of going against the grain and a commitment to creation that goes above and beyond commercial restraints, each of them embodying in their own way the group’s mantra, “Only The Brave, challenging the rules, fostering creativity”.

Radical Renaissance- 60 traces the evolution of this forward-thinking visionary and his group of companies that bring humanity and philanthropy to the workplace and marry craftsmanship with industrial production. Featuring provocative photography from the most eye-catching campaigns, groundbreaking runway shows, and previously unreleased behind-the-scenes images, this volume explores the worlds of design visionaries from Martin Margiela (making an unexpected cameo appearance) to John Galliano, from Consuelo Castiglioni and Nicola Formichetti to Viktor Horsting and Rolf Snoeren, making it a must-have for any fashion enthusiast and industry professional. In the early 1970s, a young Renzo Rosso commandeered his mother’s sewing machine to create a pair of extravagantly flared pants. He wore them, his friends wanted them too, and a clothing pioneer was born. Today he is the father of seven, an organic food enthusiast (“The luxury of the future is eating well”, he says), and a Millennium Development Goals Global Leader to the United Nations, thanks to his philanthropic work with his Only The Brave Foundation.

The Coral Triangle- Take a breathtaking plunge into the colorful world of the Coral Triangle, the waters that cradle Indonesia, Malaysia, the Philippines, Papua New Guinea, the Solomon Islands and Timor-Leste. One of the world’s most mature reef networks, home to 30 percent of all the world’s coral, this magnificent marine expanse boasts the highest diversity of coral and fish species on the planet. Underwater photographer Chris Leidy beautifully captures a vision of this wonderland through his lens and conveys the inherent complexities of each singular, fleeting scene, illustrating the vital magic of the Coral Triangle. Comprising the most biodiverse ecosystems on our planet, oceans are humanity’s life-support system, processing more carbon dioxide than rainforests. Featuring a passionate text by Fabien Cousteau, The Coral Triangle presents the underwater world as a complex realm filled with vibrant life, inviting readers to fall in love with its majesty, and inspiring deeper understanding of the fragility of coral reefs and the unparalleled importance of taking action to protect our oceans.